Most Pastors were not called by God- Rights Activist 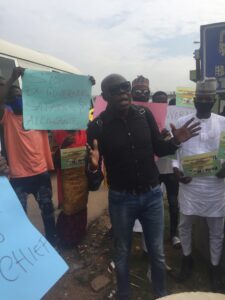 Popular activist and philanthropist, Chief Patriot Patrick Osagie Eholor says it is worrisome and disturbing that most people who claim to be pastors or men of God are not, as they were not called by God in the first place.

Patriot Eholor who is the President of One Love Foundation expressed total displeasure over how ‘these men of God’ have now turned the church into a business centre and living flamboyant lives, stating that the development was the reason why development is stagnant to some extent in Nigeria because, politicians now see the church as a place where they take refuge after stealing public funds meant for development of the country without the so called men of God asking the source of their income.

Eholor said Christianity was supposed to provide comfort, love and unity among believers but has degenerated to a profit making venture by some unscrupulous elements championing the agenda of satan at the detriment of the poor masses.

He noted that Christianity in Nigeria especially with the Pentecostal Churches were now run like a family business where the husband is the General Overseer, the wife as the Church President And children  as Church Treasurer Senior Pastor respectively as a sad development. He said when we get Christianity right, Nigeria would be a better place.

He wondered why instead of these people to hit hard on the corrupt politicians using their pulpits has now joined the masses common enemy to oppress them further.

He said “Nigerians are faced with poverty, unemployment and diseases, many have turned to religion as their only source of hope and solace. However, many became the victim of religious abuse as a result of this bogus preachers who capitalised on people’s desperation to gain fame, wealth and also satisfy their sexual lust.”

“They have been known to hoodwink their followers into parting with huge sums of money and also subject them to dubious rituals, in the name of “performing miracles”.

“As these miracles are usually staged using “actors, psychological tools or technologies”, and are meant “to attract members and also to establish a hierarchical religious power structure with the pastor at the top.”

“As a result of these miracles, many have been injured, marriages have been broken and hundreds have lost their lives, all in the hands of these deceptive preachers and prophets.”

The rights activist further advised Christians to set the Bible as their faith based standard in all they do; citing Psam 1 and other verses promoting true Christian lifestyle.

“That’s why God has told us not just to read or hear his words, but meditate on them. To meditate is to reflect on, to ponder, to mull over, to talk about, to re-read, to re-hear, to say to others, and to hear from the lips of others.

We learn in Psalm 1 that God blesses those who: ‘do not follow the advice of the wicked, or take the path that sinners tread, or sit in the seat of scoffers’ (1:1).

It is only delighting in and meditating on God’s teaching, which will fill our minds, hearts and lives with God’s truth, rather than the rubbish found all around us. If garbage goes into our minds, garbage will come out. If God’s words go into our minds, then God’s words will come out in our life, speech, and actions. And we will become fertile and fruitful, as Psalm 1 tells us:

They are like trees planted by streams of water, which yield their fruit in its season, and their leaves do not wither. In all that they do, they prosper (1:3).”