Condom In Private Part: School says it will cooperate with police investigations into death of pupil

The management of Premier Academy, Lugbe Abuja, says the school is cooperating with police investigations into the sudden death of a student of the school, Keren Akpagher.

The 14 year old SS1 student reportedly died on Tuesday, June 22nd, from hyperglycemia triggered by sepsis resulting from infection caused by a condom found in her.

Keren’s mother, Mrs. Akpagher had demanded justice for her child, who she alleged was sexually abused before she was withdrawn from the school on June 19th for treatment after she complained of redness of the eye.

According to reports, Mrs. Akpagher said she immediately challenged the school authorities after an hospital report showed the cause of Karen’s death, but the institution only promised to look into the matter.

In a statement made available on the school’s official facebook page, after reports about the child’s death went viral on social media, the school management commiserated with Karen’s family, stating that the case is being investigated by the police and the school is fully cooperating with law enforcement agents to get to the root of the matter.

“We deeply commiserate with the family of Keren Akpagher, who was a student of Premier Academy Lugbe, Abuja until her demise on Tuesday 22nd June, 2021. Before her death, Keren Akpagher was an easy-going student who never appeared before the academy’s disciplinary committee on any issue.

As a school, we are committed to ascertaining the cause of Karen’s death because the life of every student at Premier Academy matters.” The school wrote.

Read the full statement below:

Premier Academy commiserates with the family of Keren Akpagher

We deeply commiserate with the family Keren Akpagher, who was a student of Premier Academy Lugbe, Abuja. Until her demise on Tuesday 22nd June, 2021. She was admitted into the academy (JSS2) on 16 April, 2019 but she resumed on Sunday 28th April, 2019.

On admission, according to the medical report and her mother’s attestation, Karen Akpagher was diagnosed with Type 1 Diabetes Mellitus at the age of (9) and had been on insulin injection. The insulin injection was handed over to our clinic by her mother Mr, Akpagher, Vlhimga Vivien and we judiciously administered the insulin to her twice each day until she left the school in a healthy condition on 19th June 2021.

All through her stay at Premier Academy; Keren’s health was managed with a controlled diet and frequent monitoring of her blood sugar level by our well-trained health officials at the clinic. The last fasting blood sugar test she did on Thursday the 17th June, 2021 was 114mg/dl.

On Thursday 17th June 2021, Keren Akpagher visited the school’s clinic with a complaint of redness of the eye. Her mother, Mrs Akpagher requested that she should be taken to see an Ophthalmologist on Sunday 19th June 2021 and she was taken for the appointment in the morning of that same day. On her return to the school on that same day (Saturday), her mother further requested to pick her home because Keren insisted on going home for the weekend. An exeat was granted and she went home with her mother in a healthy condition.

On Monday morning-21st June 2021, we learnt she became ill and hospitalized. On hearing that as a school, we mobilized immediately and visited her at the hospital- Queen’s Clinic Wuse, Abuja. It was heart-rending when we heard of her demise the next day Tuesday, 22nd June 2021. Before her death, Keren Akpagher was an easy-going student who never appeared before the academy’s disciplinary committee on any issue.

Since the demise of Karen Akpagher, there have been speculations and unfounded statements concerning her death on social media especially on Whatsapp. We hereby inform the general public that whatever message they have come across on social media is unfounded. As a school, we are committed to ascertaining the cause of Karen’s death because the life of every student at Premier Academy matters.

We wish to clearly state that we will cooperate with the police unit as we are committed to ensuring that the actual cause of Keren’s death is fully determined.

At this point, we enjoin all interested parties and the public to desist from making unfounded statements, so as to assist the investigation process. 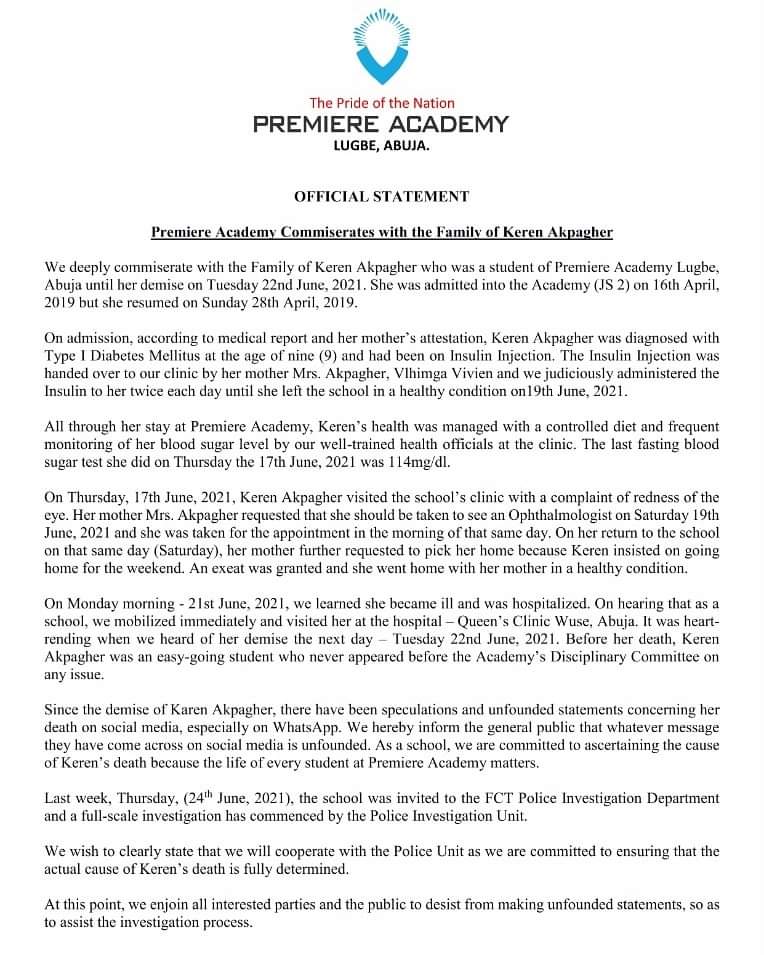